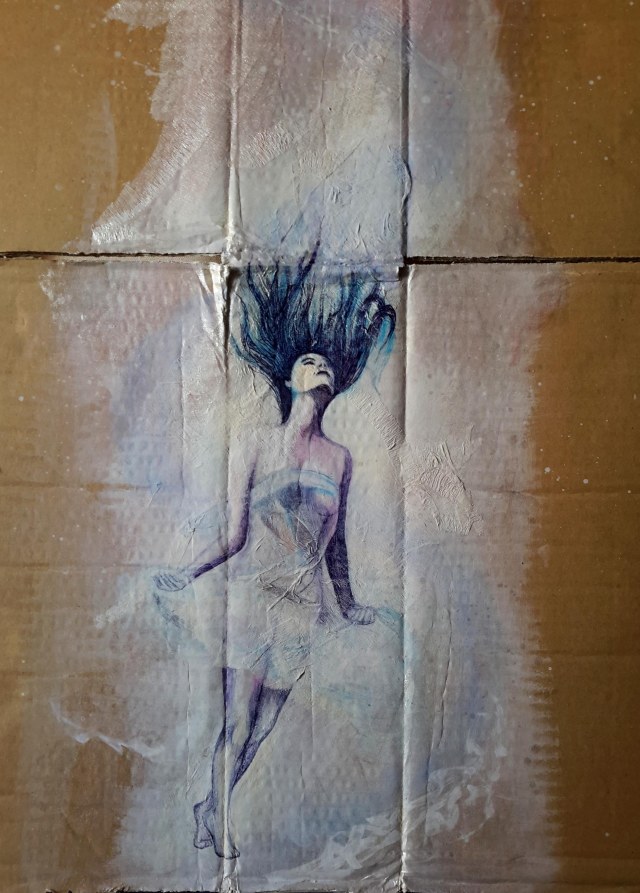 The story of Orpheus and Eurydice is one of the most frustrating tragedies I’ve ever read.

I recently took part in an exhibition where poets and artists were paired together at random to create a piece of art and likewise a poem in response to the other as muse.  I had the good fortune to work with published poet, Robert Francis, who wrote Orpheus, a poetry anthology I read with great interest, which references snippets of the legendary myth in parts.  Not being familiar with it, it certainly provoked a response from me.

In short, Eurydice, daughter of Apollo, is a beautiful charming nymph that Orpheus, a legendary musician and poet, falls deeply in love with.  And because no woman, natural or supernatural, can resist the power of his music she falls madly for him too.  Anyway, they soon get married and enjoy a brief spell of passionate joy that is cut short when, soon after their wedding day, Eurydice is running through the meadows being pursued by a lesser known god not worth mentioning, who, possessed by lust, couldn’t help trying his luck, the dirty dog.  In her haste, she steps on a viper, is bitten and dies.  Oh, and then is immediately cast down to Hades.  I’m sorry, what?

Well.  Orpheus is absolutely devastated on hearing that his soul mate has been stolen from him and is now residing in hell, that he goes around singing the blues and playing the lyre wherever he goes, melting all who hear his heartrending lament, including the birds, the trees, the rocks, anything with or without a pulse.  He then resolves to enter the Underworld and negotiate with Hades himself to agree a release for his precious Eurydice.  On entering, he manages to win over the three-headed dog, melt the stony hearts of the three furies, and the demons themselves cannot resist him, crying their eyes out in sympathy on hearing his sorrowful music.  Soon, he is faced with Hades, god of the Underworld.  Many a brave soul has begged Hades to return their loved one to them and he has always refused, but there is something so hauntingly beautiful about Orpheus and his heart-aching melodies that Hades softens, remembering how he fell in love with Persephone, his queen of the Underworld, and pursued and captured her against her will so she couldn’t escape but then after a while it turned out she loved him too in a twisted way, much in the same way those captured end up loving their kidnappers…but that’s another story.  Let’s deal with this one.

So Hades relents and agrees to reunite Orpheus with his love and lead Eurydice out of the Underworld back up to the earth, but on one condition (obvs, it wasn’t going to be that easy).  During his journey he must not glance back at her, not once, until they are both safely outside of the dark tunnel.  If he fails, she will be cast back down to Hades forever.  So, Orpheus leads her out of the Underworld remembering and honouring this agreement, trusting that his wife is behind him.  At the very last moment, just as he steps out of the tunnel into the light, excited, like an idiot, he turns around to greet her forgetting himself and casts his eyes upon her face.  Immediately he realises what he has done and poor Eurydice, one step away from redemption, looks at him in horror and barely able to utter a farewell, is instantly dragged back down into the Underworld whilst the shocked and mortified Orpheus tries to grasp her only to grasp thin air.  Oh dear.  But seriously, couldn’t you wait just a few more seconds?

He is forbidden to return to Hades having failed this task and spends the rest of his earthly life – which is very short as he gets attacked and torn from limb to limb by a bunch of drunken banshees whose advances he rejects – roaming the fields and crying his eyes out and playing the lyre in heartbroken abandon.

On learning of this torrid tale, I could only think that’s it, after all that?  No redemption at all?  Surely Orpheus’s and Eurydice’s love should have won?  How frustrating!  What a silly hopeless story with a pointlessly tragic ending.  However, some accounts tell of their reunion in the afterlife when he too is cast down to Hades after his mortal death.

Why is Eurydice so powerless in the whole scenario?  She was just an innocent, the ultimate damsel needing rescue.  Why couldn’t she rescue herself?  As a nymph, didn’t this embodiment afford her some magical leeway to release her from her fate?  Why is she cast down to Hades when all she did was try and escape the clutches of a rapey entity who was perving at her in the bushes?  Why didn’t she go to heaven instead?  She was a good nymph.  It’s as if she deserved such ill luck for not allowing herself to be molested, which some may argue is a lesser evil to suffer than being cast down to Hell for eternity.  Why are the laws so favourable to the male characters in this story?  And the fact that Eurydice’s only crime was to have fallen in love with Orpheus doesn’t make divine sense at all.

I mean, I have to applaud his momentous efforts, his public mourning, his admirable crusade to find his lost love.  But he messes it all up right at the moment he could have won her back!  What a goof.  And yeah, he must surely suffer forever after for damning her, for never being there when she was snatched from him and then being the cause of her demise the second time.  But hey, the realist in me says she turned him into the best musician he could ever hope to become.  So, dry your eyes, Orpheus, and go get yourself a record deal.  Eurydice was the ultimate muse.  Because of her, he dragged forth his art to the point of melting demons to tears, indeed making demons realise they had a heart, and therefore entering and exiting hell unscathed.  Damn, he’s got to be good.  She drew out his well of talent to the utmostest.  What exactly did you do for her, Orpheus?  You weren’t there when she needed you, you got her hopes up with your charming rescue attempt but then you cast her back down to damnation because you forgot your promise.  Shabash.

Hence, disappointed with the fact that Eurydice’s story was one of a female as victim from start to finish, and being presented with an opportunity to work with a poet whose writings referenced this sorry love story, I wanted to depict her as a more wily clever nymph, who does save herself, who finds her own way out of Hades with or without Orpheus, so the Underworld is not a doomed final destination but rather somewhere she was wrongfully cast down upon and could somehow, using her wits and wile, escape.

Perhaps she is helped by a will ‘o’ the wisp, sprite, elf, or other magical creature allied to the nymphs, but through sheer cunning, clever strategems, faith and the courageous acceptance that she may perish trying, she does it.  Because there must be an escape from damnation if you’re an innocent?  And isn’t it better to die trying than to give up?  And surely, love conquers all?

*I used cardboard because I like making “high art” on “low” materials.  Although this is a sketch, it was exhibited as it was and is a starting point for a series of works based on Eurydice’s journey to come.